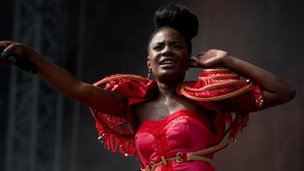 Twenty new works from the likes of composer Matthew Herbert and folk group Lau are to be created for a New Music Biennial in 2014.

The inaugural event, developed by PRS for Music, is designed to "celebrate creativity" and "inspire audiences" across the UK.

Another commission includes a song by The Noisettes' Shingai Shoniwa.

Each of the 20 new works will be performed across two weekends in London and Glasgow next summer.

"It is always a pleasure to celebrate the diversity and quality of the UK's contemporary compositional scene," said Roger Wright, controller of BBC Radio 3 and chair of the biennial judging panel.

"The 20 projects selected by the distinguished panel are wide-ranging and exciting. They promise to offer a stimulating experience, either live or in the radio broadcasts," he added.

The composition from electronic music pioneer Herbert will feature the sounds of 20 pianos from across the world, including Steinways and forgotten out-of-tune family instruments, at famous locations.

Other collaborations include jazz musician Gwilym Simcock, working with City of London Sinfonia and clarinettist Michael Collins; and a project in which a young composer, Samuel Bordoli, will bring together opera and skateboarding in London and Scotland.

Composer and broadcaster Mary Ann Kennedy is leading a collaboration on ferryboat songs from the Scottish Highlands, which combines folk and electronica.

Shoniwa, from London indie-rock band The Noisettes, will join forces with producer David Okumu to create a new vocal piece inspired by the values of the 2014 Commonwealth Games which are being held in Glasgow.

It will be sung by community choirs.

The commissions were chosen by a judging panel including singer and BBC 6 Music DJ Cerys Matthews, award-winning composer Max Richter and the Southbank Centre's Head of Classical Music, Gillian Moore.

Another judge, musician Dame Evelyn Glennie, commented: "There is no shortage of talent, imagination and creativity in the UK and the excellent applications to the New Music Biennial have proved this."

The biennial event has been developed in partnership with Creative Scotland, Arts Council England and the British Council.

Recordings of each of the 20 commissions will be released as digital downloads by NMC Recordings.