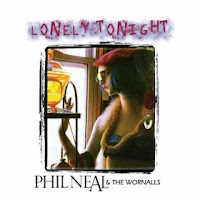 Over the last 30 years Phil Neal has fronted a number of bands, including The Artists, the Phil Neal Band, the Power Ties, and the Rockhills, playing hundreds of gigs, and honing his talents as a songwriter, singer, musician and performer. The Kansas City native is the epitome of a Midwestern rocker, and with his latest band, The Wornalls, he’s in no mood to let his reputation slip. Their debut long-player “Lonely Tonight” is a genuine treat, the sort of record that The Jayhawks and Tom Petty brought out in their primes - records that combine rootsy Americana rock with hook-heavy power pop.

Back in the very early ‘80s, Neal and his band The Artists were regulars on MTV, and seemed on the verge of a major commercial breakthrough. It would be nice to think that “Lonely Tonight” could somehow replicate that success. Indeed, if it was just down to the quality of the song, and their execution, Neal and has band would be on near constant rotation on grown-up radio stations all over the western world. In reality, fans of Neal’s brand of melodic rock and roots music will have to hunt it down, but it’s time well spent. The album begins with a stone cold classic-to-be in “Bad Boys” – the sort of thing Phil Seymour or Marshall Crenshaw might have released back in the day. “In Your Car Tonight” slows things down somewhat, without sacrificing its pop nous, and the title track is surely a big hit in some parallel universe where good taste is still paramount.
www.philnealandthewornalls.com
www.facebook.com/ThePhilNealBand
www.reverbnation.com/philnealandthewornalls
Phil Neal & The Wornalls CD BABY Page
Phil S.