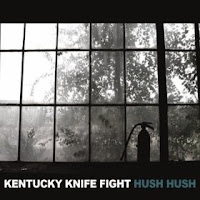 The magnificently monikered Kentucky Knife Fight have earned themselves an enviable reputation in their hometown of St. Louis, playing their twangy punk-blues to enthusiastic audiences at their own headline shows and in support of touring national acts - not that you’d necessarily want to follow them on stage.

On “Hush Hush”, their second long-player, they continue to mix dark country with even darker blues, and bring to mind bands like Gun Club, Gallon Drunk and Dream City Film Club, together with songwriters such as Nick Cave and Tom Waits. That’s good company to keep, and Kentucky Knife Fight show more than enough promise to hold their heads up amongst those esteemed names.

Vocalist and wordsmith Jason Holler (the band write the music) delivers his lyrics with a dirty, unctuous snarl, whilst his bandmates whip up a boogie storm or keep it slow and sleazy. Lead single “Misshapen Love” definitely falls into the former camp. It’s brazen soulfulness hovers between the garage and the dancefloor, just so long as there’s a wall to bounce off. “Love the Lonely” arrives on a slow train before releasing the brakes, and on the splendid title track, the entire band take the opportunity to showboat, but it’s a cracking song with a stuttering rhythm and post-punk feel, and might just be the best thing on a consistently fine album.
www.facebook.com/KentuckyKnifeFight
www.kentuckyknifefight.bandcamp.com
Phil S.