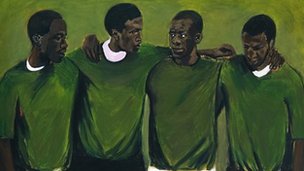 A portrait painter, whose subjects are imaginary, is one of four artists in contention for the 2013 Turner Prize.

This year's Turner exhibition will be held at Ebrington in Derry-Londonderry, 2013's UK City of Culture.

The other shortlisted artists will each receive £5,000.

Established in 1984, the Turner Prize is awarded to a contemporary artist under 50, living, working or born in Britain, who is judged to have put on the best exhibition of the last 12 months.

Lynette Yiadom-Boakye, who lives and works in London, is shortlisted for her Extracts and Verses exhibition at the Chisenhale Gallery.

She is of Ghanaian descent and is the first black woman to be in contention for the award.

Born in 1977, she attended Central Saint Martins College of Art and Design, Falmouth College of Arts and the Royal Academy Schools.

According to the prize's organisers, her "intriguing" paintings "appear traditional but are in fact much more innovative". 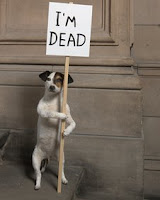 His work, which combines jokes and commentary, can be found on greetings cards, in books and in magazines, as well as in galleries.

His words have been used in recordings by David Byrne and Franz Ferdinand and he directed the video for Blur's 2009 track Good Song.

Born in Macclesfield in 1968, Shrigley is shortlisted for his solo exhibition Brain Activity, at London's Hayward Gallery.

The exhibition, said the Turner Prize organisers, was a "comprehensive overview" that revealed "his black humour, macabre intelligence and infinite jest".

Born in Lille in 1978, Laure Prouvost won the fourth Max Mara art prize for women in 2011 for her short films and installation work.

Based in London, she is shortlisted for her new work Wantee, featured in Tate Britain's Schwitters in Britain exhibition, and her two-part Max Mara art prize installation.

Born in 1976 and based in Berlin, Tino Sehgal has been shortlisted for his "pioneering" projects This Variation and These Associations.

The latter, staged last year at Tate Modern in London, invited the public to interact with volunteers in a "live installation" staged in the gallery's expansive Turbine Hall.

"Both structured and improvised, Seghal's intimate works consist purely of live encounters between people and demonstrate a keen sensitivity to their institutional context," said organisers.

"Through participatory means, they test the limits of artistic material and audience perception in a new and significant way."

This year's jury is chaired by Tate Britain director Penelope Curtis and includes the curator Annie Fletcher and the writer and lecturer Declan Long.

Long said the each of the four shortlisted artists represented "remarkable developments" in art.

"There's so much range here, it's fantastic," he told the BBC's arts editor Will Gompertz.

Bookmakers Ladbroke have made Shrigley 2/1 favourite to win the prize, ahead of Prouvost, Sehgal and Yiadom-Boakye, a 7/2 outsider.

It is the first time the Turner Prize exhibition has ever been held outside England.