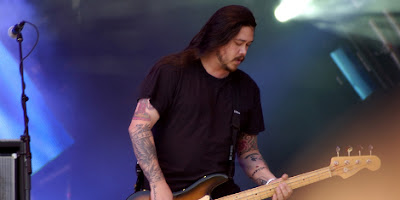 Deftones bassist Chi Cheng has died, four years after a car accident left him in a coma.

The 42-year-old died on Saturday after being taken to hospital, according to a website set up to raise money for the musician.

Chi Cheng was seriously injured after being thrown from a car during a head-on crash in Santa Clara, California.

More than 2,000 messages have been left so far by fans paying tribute to Cheng.

No cause of death was given on the website set up to raise money for his care.

"I know you will always remember him as a giant of a man on stage with a heart for every one of you," his mother wrote in a statement on the site

"He left this world with me singing songs he liked in his ear."

Deftones, an alternative metal band from Sacramento, California, got together in 1988.

The band won a Grammy for best metal performance in 2000.

They are due to play this summer's Reading and Leeds Festivals and toured the UK in February.