Review: Disaster Bird – ‘Til The Stars Give Up

Disaster Bird – ‘Til The Stars Give Up (Independent) 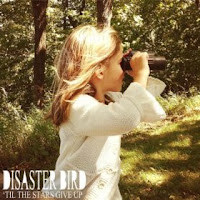 Disaster Bird are husband and wife songwriters, and multi-instrumentalists, Brian and Jessica Perry. On their debut album, “‘Til The Stars Give Up”, they’re joined by various musical friends and collaborators, namely Trevor, Tim, Blake, and Jim, who contribute harmonies, guitar parts and occasional trumpet. The music they make is rooted in the indie-folk tradition, which has attracted both critical praise and considerable commercial success, with groups like Neutral Milk Hotel and Arcade Fire blazing a path. Disaster Bird certainly won’t be lacking the former; it’s impossible not to be impressed with what they’re doing, but as ever with the latter, lots of luck, timing and drive will inevitably play their part.

There are many aspects to Disaster Bird’s sound that impress and bring a smile to the face. Their ability to entwine and interweave vocals is simply stunning and it’s impossible not to be swept along by songs like “While the Skies Change” and “The Thaw” – both of which bring to mind the glory days of Richard and Linda Thompson, reflected through a contemporary, post-punk filter. Then there’s the perfect “Wintersend”. Dark, savage and sinister, it’s hardship and adversity distilled into three minutes and delivered at pace. It’s worth mentioning that “Lowertown” arrives on a rickety Joy Division inspired bassline and “Planes Over Houses” magnificently combines British folk-rock with something modern and quite unsettling.
www.facebook.com/Disaster-Bird
www.disasterbird.bandcamp.com
Phil S.