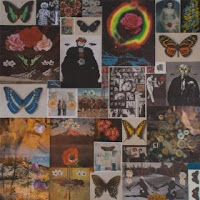 Sparrows Gate, from San Luis Obispo, CA, do lots of things right on their debut long-player “Beneath The Electric Church” (two EPs were previously released 2007 “Heart Beat EP” and a self-titled record in 2010). Fronted by Zebedee Zaitz on lead vocals, guitar and harmonica, the band sit comfortably on a timeline that includes Neil Young and Crazy Horse, Tom Petty and The Heartbreakers and the often-overlooked Jayhawks, circa “Hollywood Town Hall”.

Americana and country-rock are the easy labels that’ll be used, but there are several other facets to the Sparrows Gate sound, which will separate them from the alt. country crowd. Primarily, they’re on nodding terms with a host of classic ‘60s psychedelic rock influences, from Quicksilver Messenger Service to Country Joe and the Fish and early Steve Miller Band. It gives them a little muscle, and Joel Tolbert’s keyboard flourishes on what sounds like a Hammond B-3, gives them an extra something, which brings to mind both a thousand gospel records and Garth Hudson’s majestic musicianship with The Band.

“Beneath The Electric Church” begins with “Speak My Mind”. Zaitz’s voice is distinctive, backing vocalists provide extra depth and the band find their groove quickly. It’s followed by the first of two versions of “Lavender”, and its sublime rolling rhythm and sterling guitar / keyboard interplay elevates the whole album. And there are plenty of other highlights still to come, from the seven-minute “Rose Parade”, which wouldn’t have sounded out of place on the second side of the Dream Syndicate’s “Medicine Show” record and the equally impressive “Lonesome Boulevard”.
www.facebook.com/sparrowsgate
www.sparrowsgate.bandcamp.com
Phil S.