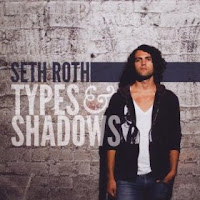 Seth Roth is a natural born vocalist. The Tacoma, Washington native has seen singing since he was five and spent a dozen years fronting an alternative rock band before discovering songwriters like Bob Dylan and Neil Young. Now solo, his new record, the five-track “Types & Shadows” EP indicates an artist who is constantly evolving, and discovering multiple new musical avenues to explore.

Defining his music as ‘folk’, Roth is being somewhat disingenuous. There’s far too much happening on these five tracks to file it away under one genre, though there’s a consistency to his sound that makes everything here recognizable as coming from a single source, and is underpinned by Roth’s warm, soulful voice.

He begins with “Unapologetic”, where he’s joined by award-winning songwriter Beth Whitney on vocals; the pair of them combining beautifully, and if they decided to collaborate on a complete album, they can put me down for a copy right now. His Dylan influence is referenced on “Blood On the Tracks”, though beyond the title and it’s oblique ‘70s musical allusions, it’s very much a contemporary song. My favourite may be the EP closer, “Through the Night”, where Roth lays his soul bare. It might not be the easiest of listens, but it’s honest and real.
www.sethrothmusic.com
www.facebook.com/sethrothmusic
www.sethroth.bandcamp.com
Seth Roth CD BABY Page
Phil S.