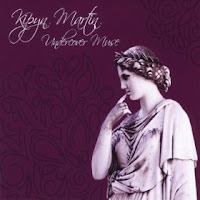 When you hear a new artist for the first time, there is always some facet or characteristic that you’ll initially pick up on. With Kipyn Martin it’s undoubtedly her voice, an instrument of unrefined purity, which is wonderfully suited to her blues based folk and Americana material. She’s honed her style by extensively touring with her mentor, Pops Walker, throughout Western and Northern Virginia, and playing many gigs in her current hometown of Washington DC. In between she’s received a Master of Music degree in composition from Shenandoah Conservatory in Winchester, VA.

From what I can ascertain, “Undercover Muse” is Martin’s debut collection, and she opens her account with the title track, a folk rocker that somehow connects Sandy Denny period Fairports with acoustic Grateful Dead. It’s a beautiful combination of styles, and leads into the equally lovely “Orchard”. Martin’s voice is just captivating, and engulfs the listener in warm, complex tones. Musically things are kept quite simple with acoustic guitars providing the majority of the backing, allowing Martin’s voice and her songs to take centre-stage. Perhaps my favourite is “Nightbird” – it’s slow jazz arrangement seeps into the bones, and sticks around the subconscious long after the album has finished.
www.kipynmartin.com
www.facebook.com/kipynmartinmusic
www.cdbaby.com/Artist/KipynMartin
Tony S.