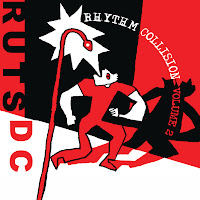 There was always something intrinsically right about The Ruts. Their debut 7” appeared on Misty In Roots’ People Unite label, the first in a run of faultless singles that rivaled opening salvos from the Pistols, Clash and Smiths. Their debut album, “The Crack” updated the punk rulebook, Peelie loved ‘em, and to top it all they were regularly having top twenty hits. What could possibly go wrong?

For those of us who were there, the answer’s still difficult to accept - frontman Malcolm Owen died in 1980 aged 26, ripping the band apart, and bringing The Ruts to a sad, premature end. The three remaining members, John ‘Segs’ Jennings, Dave Ruffy and Paul Fox, eventually regrouped as Ruts DC, releasing “Animal Now” in 1981 and “Rhythm Collision” with dub producer Mad Professor in 1982, before splitting a year later. They reformed in 2007 to play a benefit gig for Fox, who’d been diagnosed with lung cancer (he died later the same year) and the two remaining Ruts headed back into the studio in late 2008, again with Mad Professor, to begin recording “Rhythm Collision Vol. 2”.

Some four and a bit years later and the album’s finally been released. Time and circumstance meant that Mad Professor couldn’t be at the helm for most of the sessions, so Prince Fatty (aka Mark Pelanconi) manned the decks and he’s made a sterling job of it. Recorded with various vocalists, the band has made a contemporary punk-reggae record, which draws on various styles, without ever sacrificing its spacey dub vibe. Opening cut “Mighty Soldier” provides instant gratification; Tenor Fly’s vocal wavering between parody and genuine menace. “Mix Up”, featuring Molara, drips electronica, and brings to mind both Massive Attack and a classic Augustus Pablo side.

It’s a heady and primal collection, and is altogether affecting throughout its dozen tracks, as it veers from song-based material to console remixes - and pleasingly, on “More Bass”, “Technology (Super Dub)” and “Soldier Dub” we get to hear the essence of Ruts DC, stripped back to their dub core.
www.theruts.co.uk
Rob F.

Ruts DC are playing several dates around the country in the next few months. Details: HERE