Review: The Lobbyists – Our Home EP

The Lobbyists – Our Home EP (Independent) 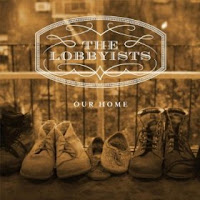 Their “Our Home EP” is the group’s debut offering, a six track collection which showcases their songwriting skills, their musicianship, and their quite striking vocal harmonies. These are instantly apparent on the EP’s launch track, “Ramblin'”, which is preceded by an 80-second acapella display that’s quite beautifully executed. We have to wait until the next track “Sunshine” before they sing again, and this time it’s accompanied, though no less impressive.

I suppose it’s inevitable that they’ll be compared to other outstanding vocal groups, from Crosby, Stills and Nash, to contemporary artists like Fleet Foxes, but there’s an unblemished optimism to The Lobbyists, which allows them to stand apart from obvious comparisons and associations, and makes them an intriguing and welcome proposition.

There’s not a weak track on the record, and I can imagine songs like the fore mentioned “Ramblin'” and the pacey title track are showstoppers when presented live. Indeed, should they feel the urge to spread their wings, I’m sure they’d go down a storm on the UK folk festival circuit. The organizers of Cambridge and Cropredy need to get on the phone, pronto.
www.facebook.com/lobbyistsband
www.thelobbyists.bandcamp.com
The Lobbyists CD BABY Page
Tony S.