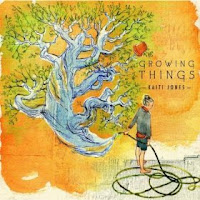 Originally from Portland, ME and now resident in Cambridge, MA, singer-songwriter Kaiti Jones describes her style as “Maine-bred, Nashville-infused”, but I’m not sure that’s a wholly accurate description. Although there’s plenty of rootsy sincerity and a hint of Americana twang to what she does, “Growing Things” feels a million miles away from contemporary Nashville fare. Indeed, the four songs on Jones’ new EP frequently refer back to the Greenwich Village scene and the ‘70s West Coast singer-songwriter boom, though there’s a contemporary indie-folk sheen applied to the songs, their production and arrangements.

I can confirm it’s a thoroughly enjoyable 15-minute sojourn into Jones’ world, which leaves the listener both satisfied and eager to hear some more. Hopefully there’s an album in the works, but until it arrives – fingers-crossed - the four tracks here (together with 2009’s “Arise Child” EP) provide pleasures aplenty. She launches the collection with the title track, a multilayered indie-folk-rocker, with a song that conjures up images of change, loss and endlessly moving on. Guitars shimmer and fade, and Jones’ voice hovers between the quirkiness of Joni Mitchell, and Emmylou’s country classicism. “Some Time(s)” reinforces the notion and “I See a Door” indicates that she does pensive and meditative with equal aplomb.
www.kaitijonesmusic.wordpress.com
www.facebook.com/kaitijonesmusic
www.kaitijones.bandcamp.com
Tony S.