Andy Warhol art to be displayed at Scottish Parliament 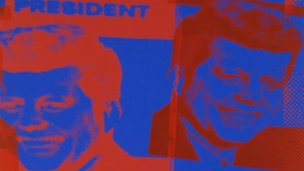 More than 40 of Andy Warhol's paintings and prints are to go on display in Scotland later this year.

The works, which explore power and politics, will be part of a free exhibition at the Scottish Parliament from 4 October until 3 November.

The majority of them come from the Andy Warhol Museum in Pittsburgh in the US.

They include Warhol's Flash-November 22, 1963 screen prints about the assassination of US president John F Kennedy.

Also featured will be a portrait of Scottish philanthropist Andrew Carnegie, who made his fortune in the US.

The exhibition coincides with activities at Holyrood showcasing Dunfermline-born Carnegie's international legacy and will be the first time the works have been displayed in Scotland.

Eric Shiner, director of the Andy Warhol Museum, said the items would show the "full gamut" of the pop artist's life and work.

"Some are very recognisable while others will give the British public an opportunity to learn more about Warhol's approach to art and life," he said.

"We are delighted to be sharing some of our permanent collection. It may be the only opportunity some people in the UK will have to see an original Warhol."

The event was made possible by an agreement made in the US by Holyrood Presiding Officer Tricia Marwick, the museum and the Carnegie Trust.

Ms Marwick, in Pittsburgh for the annual Scotland Week programme, said: "It is a unique opportunity to view Warhol's works as they explore the role of power and politics in modern life, within the home of debate in Scotland, our parliament.

"It is therefore fitting that this exhibition will form part of a series of activities to mark Andrew Carnegie's international legacy at Holyrood."

Carnegie UK Trust chairman Angus Hogg said: "The focus of our festival of events will be on the emerging challenges of the 21st Century and the role of philanthropy in modern society."