Review: Levi and Shannon – What Matters

Levi and Shannon – What Matters (Independent) 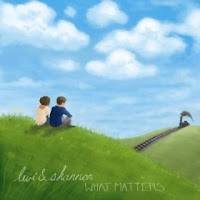 Indie-folk duo Levi North and Shannon Maginity began playing together purely for fun – a chance to play and sing favourite songs. Needless to say, ambitions soon evolved, and before long they were writing and performing their own compositions, and putting their own thoughts and feelings into words. It can be a difficult shift of mindset, but on “What Matters”, the duo’s debut release (seven tracks / 29 minutes), they appear to have fluently made the transition from interpreting other people’s art to making their own, and produced a record of real quality.

Just about every word on “What Matters” is sung in harmony, and their two voices blend beautifully, and add considerable depth to a recording which is relatively uncluttered and quite simple in its presentation; an acoustic guitar is generally to the fore of their sound, though often supported by various strings and keyboards. They get things rolling with one of the standout tracks, “Sleep”, its winning way with an upbeat chorus and melodic barb is impossible to ignore. “Off Track” is equally energized, and “As Long as You Need” shows a more thoughtful, unhurried side of their craft – and mixes in a snifter of Richard Buckner-esque Americana.
www.facebook.com/leviandshannon
Phil S.