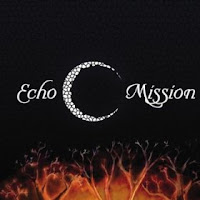 Describing their sound as ‘modern vintage’, Delaware quartet Echo Mission appear to have hit that particular nail directly on the head. Their sound borrows openly from a host of classic rockers, from Cream, Led Zeppelin and The Doors, with a little Soundgarden and Blind Melon grunginess on the side. Their methodology is completed with a knowing, contemporary twist that does them considerable credit, and applies a welcome modernity to their debut release, the “Reflection” EP.

Released at the very beginning of 2013, the five-tracks they present for our delectation make for a neat and tidy introduction. Though blues-rock provides the core of their sound, they’re not afraid to mix things up a little, and the results are consistently interesting, and always pleasing.

They launch the EP with the excellent “Watching You” – a long intro builds the tension, and singer Dan Jalil provides the release. His interaction with guitarist Sean Flynn is always central to the group dynamic, though the rhythm section of Sean Dougherty on drums and bassman Mark Wheeler do a fine job, often taking unexpected routes. This can especially be heard on “Gut Sound #9” which borders on funky, and “Nice to Know You”, where all four players put in a fine shift.
www.facebook.com/EchoMission
www.echomission.bandcamp.com
Phil S.