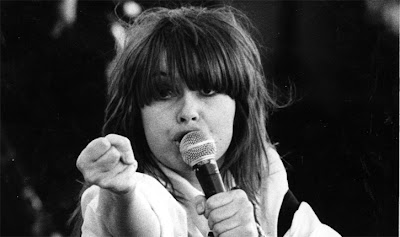 Chrissy Amphlett of Australian band the Divinyls, known for their hit I Touch Myself, has died aged 53.

Russell Crowe, who starred alongside Amphlett in a 1988 production of Blood Brothers in which she played his mother, has led tributes.

He said he will remember her "loving life and reciting verse".

The Oscar-winning Australian actor said: "Dear Chrissie, the last time I saw you was in the Botanic Gardens... That's how I'll remember you, your boy, R."

Amphlett founded the Divinyls in 1980 in Sydney and they went on to record five studio albums between 1982 and 1996, when they split.

I Touch Myself was released in 1991 and was a number one hit in their native Australia. It climbed the charts in Britain to number 10 and number four in the US Billboard Hot 100.

It was featured in the 1992 film Prelude to a Kiss and 1997's Austin Powers: International Man of Mystery. Pop singer Pink covered the song in 2009 on her Funhouse Tour.

"Chrissy's light burns so very brightly," said Drayton. "Hers was a life of passion and creativity; she always lived it to the fullest".

The statement on the Australian Recording Industry Association's (ARIA) website added: "With her force of character and vocal strength she paved the way for strong, sexy, outspoken women."

Amphlett announced she had multiple sclerosis (MS) in 2007 and made public her battle with breast cancer in 2010.

She wrote on her Facebook page last March: "Unfortunately the last 18 months have been a real challenge for me, having breast cancer and MS and all the new places that will take you.

"My illnesses have really exhausted this little body of mine that I have thrown from one end of a stage to another and performed thousands of shows."

"Chrissy expressed hope that her worldwide hit I Touch Myself would be utilized to remind all women to perform annual breast examinations," said Drayton.