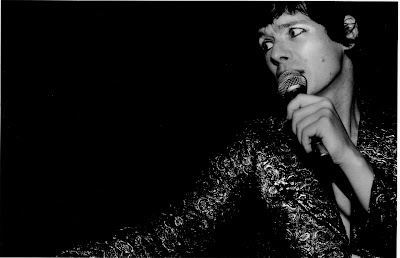 Bobby has equally delighted and annoyed hipsters since first appearing on the Chicago music scene in the mid ‘90s.  Blending aggressive showmanship with an omnivorous love of musical genres, from Suicide to Streisand or from The Sweet to Stravinsky, Bobby has often irritated and provoked audiences, but never bored them.  From experimental performance art and noise music to superficially “straight” rock Bobby is always subversive.  And he subverts himself  happily.

Bobby Conn's last album Macaroni came out on Fire Records last year and offered up a delicious bowl of cheesy noodles served up for a world of war, riots, greed and revolution.  Recorded with Bobby’s crackerjack band The Burglars and mixed by Bobby himself, Macaroni is a chronicle of our times, cheerfully spraying glitter on the chaos that surrounds us.  It’s a record for the Occupy generation, or at least for those of us who check in on the protests via Facebook.  As always, Bobby bravely battles despair with acid wit and showmanship.

He continues to collaborate with his wife and musical partner, Monica Boubou.  Fully his equal as an entertainer herself (and more than his equal in stature), her electrified violin defines the epic melodic reach of their music.  The members of his band, The Burglars, were stolen from the best groups in the Chicago underground today.  Drummer Josh Johannpeter has played with Bobby since recording the “King For A Day” album in 2006 and is currently active in the excellent electro boogie bands Lazer Crystal and Mahjongg.  Keyboardist Jon Steinmeier and master bassist Jim “Dallas” Cooper also played on “King For A Day” and are members of new wave misfits The Detholz! as well working with Mucca Pazza, Daniel Knox, Lovely Little Girls, Baby Dee, and Van Dyke Parks. The Burglars will accompany Bobby and Monica on this European outing.

"the Chicago eccentric is still out there doing his bubble-glam/skinny-tie/electro-funk think, and there's enough on the highly politicised Macaroni to justify stepping outside to find him." Independent 4*s

"Ranging from prog metal to flighty disco falsetto, his musical game plan is, as ever, unique. Conn lampoons the excesses and stupidity of American life with sly wit and unfailing accuracy." Daily Mirror 4*s

"With the Occupy Movement so far soundtracked by the likes of Billy Bragg and Rage Against the Machine, it's left to Chicago's underground hero Bobby Conn to bring some glam and imagination to the protesting." Q 4*s