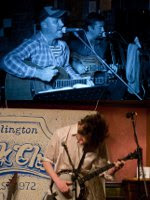 Jamie Knight and Ben Church, aka Wooden Horse, were last in Leicester playing a rousing support set for Otis Gibbs. The powerful acoustic Americana and country blues led to their debut album being described as a “potential Americana classic” by Fatea”. Catch them now before they move on to bigger things.

Dan Walsh is the UK's finest clawhammer banjo player. Three years with harmonica ace Will Pound saw him winning fans all over the country with his no holds barred high energy style. He's recently been guesting with both Seth Lakeman and The Levellers and released his first solo album, "The Same But Different" in 2012.