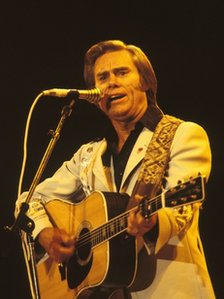 Country singer George Jones, who had a string of number one songs between the 1950s and 1990s, has died aged 81.

Jones publicist, Kirt Webster, said the Grammy-winning singer was admitted to hospital for fever and irregular blood pressure and died on Friday.

Nicknamed Possum, his signature song was He Stopped Loving Her Today, a track about love and death.

He was married to Tammy Wynette between 1969 and 1975 and the pair recorded several songs together in the 1970s.

Born in Texas on 12 September 1931, Jones played guitar for tips on the streets of Beaumont as a teenager before going on to serve in the US Marine Corps.

He returned to Texas to record for the Starday label in Houston, achieving his first top ten hit in 1955 with Why Baby Why.

Known for his precise baritone and evocative voice, Jones' first number one song, White Lightning, came in 1959, followed by Tender Years in 1961.

Country star Garth Brooks paid tribute to the singer saying: "The greatest voice to ever grace country music will never die. Jones has a place in every heart that ever loved any kind of music."

Jones had a string of top 10 songs during the 1960s and 1970s including If Drinkin' Don't Kill Me (Her Memory Will), Window Up Above, She Thinks I Still Care, Good Year for the Roses, The Race Is On.

But his battle with alcoholism and cocaine addiction frequently derailed his career and at one point his reputation for cancelling performances earned him the nickname No-Show Jones. 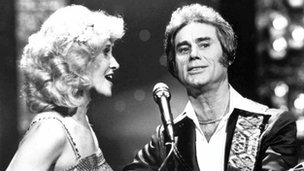 Having divorced his second wife in 1968, Jones married Wynette a year later. The pairing was an enormous professional success for both as they recorded and toured together, recording several tracks including We're Gonna Hold On, Golden Ring and Near You.

However as Jones' addiction problem worsened, so too did his marriage to Wynette, who later claimed he once came at her with a gun.

They divorced in 1975 but later resumed recording together. The couple's only daughter, Tamala is also a country singer under the name Georgette Jones.

Jones recorded the track He Stopped Loving Her Today in 1980. The song, which he said was his favourite, revived a flagging career and won him the Country Music Award's top male vocalist award in 1980 and 1981. He also earned a Grammy for best male country vocal performance.

Paying tribute to the singer on Twitter, Keith Urban said: "‏If I'm blessed enough to make it there, I look forward to you giving me the grand tour. Rest in peace George Jones!!!!!"

Singer Faith Hill wrote: "We lost one of the best voices God created this morning. Our hearts are saddened to hear that George Jones has passed away... Our thoughts and prayers are with Nancy and all of the family."

Jones credited his fourth wife Nancy, whom he married in 1983, with helping him clean up. But in 1999 he was seriously injured after driving drunk and crashing into a bridge, leading to another period of rehabilitation.

Jones was in the middle of a US tour when he was taken into hospital. At the tour's final date in Nashville in November, he was due to be joined by an array of country music stars including Kenny Rogers, Randy Travis, Garth Brook and rapper Kid Rock.