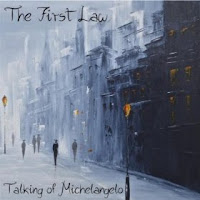 The First Law is singer-songwriter-pianist Nathan Flaks, aided and abetted by Taylor Wilde on drums and minimal synths. “Talking Of Michelangelo” is their debut record, a collection of heartfelt songs with ambitious arrangements and roots in indie and cinematic rock. Names like Keane and Jack come to mind, but they’re decidedly darker than the former, and not quite so down-at-heel as the latter. Instead the New York duo concentrate on their strengths, most of which lie in Flaks compositional talents.

The production is relatively spartan without ever sounding lo-fi or too severe. Indeed, the back-to-basics approach employed by the pair does much to showcase the splendor of Flaks’ songs – and the emotional truths they’re exposing. Beginning with “Well-Placed Stranger”, its orchestral effects are understated and discreet, but add real impetus to Flaks’ fragile vocal. Guest singer Natalie Knezevic does sterling work on the brittle “I See the Ghosts”, and “A Grand Insignificance” sounds cluttered and unstructured on first listen, but reveals much with repeated spins. I’m looking forward to hearing what they come up with next time.
www.facebook.com/TheFirstLaw
www.thefirstlaw.bandcamp.com
The First Law CD BABY Page
Phil S.