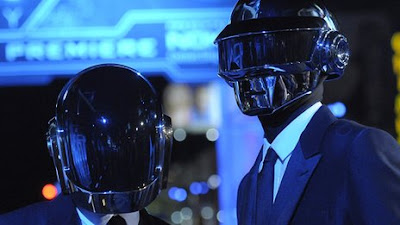 The comeback, which features singer Pharrell Williams, had the biggest streaming day for a single track in the US and UK on the day of its release.

The Swedish online music site did not release the number of streams for the track which features on the DJs' new album, Random Access Memories.

Spotify's Will Hope said the album would be "the biggest" this year.

"There was never any doubt that the first original single from Daft Punk in years was going to be one of the biggest debut singles of 2013," the director of label relations said.

Thrift Shop, a single by Seattle-based rapper Macklemore and producer Ryan Lewis, held the record in the US.

The duo whose real names are Thomas Bangalter and Guy De Homem-Christo, told Rolling Stone magazine they hired "top-notch session players" to perform on the album.

Random Access Memories is Daft Punk's first studio album since 2005's Human After All, though the band scored the Tron: Legacy soundtrack in 2010.