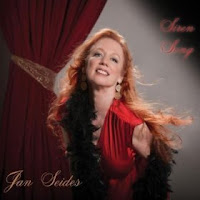 Singer-songwriter Jan Seides may well be based in Austin, but she’s a hardly a typical Texas troubadour. Though she tells it like it is, with an honest-to-goodness style that’s incredibly effective, she does so with a level of polished sophistication, which has led previous reviewers to describe her sound as Patty Griffin meets Broadway. Intrigued? I certainly was, and she doesn’t disappoint on “Siren Song”, her fourth album since her 1992 debut.

So, Seides may not be the most prolific of recording artists, but I suspect she’s uncompromising with her music, and everything on her latest record suggests a dedication to getting things just right. It’s a system that obviously works for her, as “Siren Song” is a thoroughly enjoyable collection. Seides is a clever, classic pop songwriter, with a voice to match. The arrangements and instrumentation are sympathetic and dynamic, and the whole package impresses.

Beginning with the upbeat “High Hopes for You”, a rumination on life and its ups and downs, a beefy harmonica leads the band. It’s followed by “Dishonesty”, a slower more brooding song with plenty of meat on its bones, and a propensity to get under ones skin - and stay there. It may well be my favourite track on the album, but there’s no shortage of highlights still to come, from her desire to emulate the leading ladies of the past on “Femme Fatale” to the beautifully arranged “Flying to New York City”, which sounds like it could have emerged fully formed from the Brill Building, circa 1973.
www.janseides.com
www.facebook.com/janseidesmusic
Jan Seides CD BABY Page
Tony S.