Review: Genna & Jesse – Give and Take 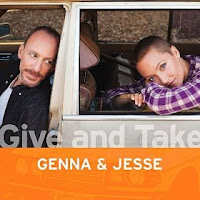 Genna Giacobassi and Jesse Dyen first got together in 2009 when Genna hired Jesse to play piano in her band. They instantly hit it off musically (and romantically), and have been together ever since, writing and performing as a duo. They’re currently based in California.

Both have interesting musical histories; Genna comes from a musical family, studied opera at college, before dropping out and hitting the road. Her soulful vocals have earned comparisons to Billie Holiday, Ricky Lee Jones and Lucinda Williams. Jesse has self-produced hundreds of tracks, hung out with Joe Strummer, garnered praise from Willie Nelson and released a solo album in 2003 called “Contents Under Pressure”

During 2011 and 2012 the couple released a series of taster tracks, but “Give and Take” is their debut album, and it’s a delight. They combine folk and jazz with a classic pop bent, and the results are complex and intricate, and simultaneously airy and light. They’re also incredibly catchy, with melodies and hooks that’ll make pop cynics smile, and have fans of grown-up radio reaching for the volume dial.

Whether their natural talents will transfer into massive sales, I’ve no idea, but if any of the above piques your interest then try and hear the wonderful title track; its pop charms are as captivating as the performance. “You're On to Me” shows off their rhythmic capabilities and “Overlooking” slows things down beautifully.
www.gennaandjesse.com
www.facebook.com/Genna-Jesse
www.cdbaby.com/Artist/GennaJesse
Tony S.