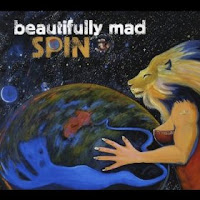 Beautifully Mad are the Sydney, Australia based Tony King and Nina Vox. Both play guitar and sing, with King writing most of the songs (there’s just one co-writing credit amongst the 13 tracks) and taking lead on the majority of the vocals – though not all. The striking artwork is down to Vox.

King was named Australian Songwriter of the Year in 2009, and it’s the quality of the songs that is immediately noticeable as “Spin” deftly presents its many charms. Both King and Vox are capable singers, though Vox steps up for the jazzier tracks, in particular “As Cool as It Gets”, where a piano and saxophone dominate (played by Bill Risby and Craig Walters, respectively), and it’s a real old-school throwback to an earlier style and a nice deviation from their string-based material.

“Spin” begins with “The Sweetest Sound of All”, a soldier’s tale told with subtlety and sensitivity; the arrangement and King’s structuring of the song keeping the listener gripped right until the end. “The One and Only” delivers plentiful pop hooks and a terrific bassline, and “An Eye for an Eye”, with Vox again on lead vocal, is intricate and complex, but never less than wholly effective.
www.facebook.com/Beautifully-Mad
www.beautifullymad.bandcamp.com
www.cdbaby.com/Artist/BeautifullyMad
Tony S.