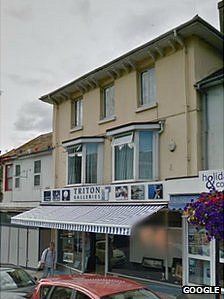 An art gallery selling paintings by Rolf Harris has been vandalised.

Threats were made against the Triton Gallery, in Torquay, Devon, if it did not remove the artwork, staff have confirmed.

Mr Harris, 83, has been questioned by police over historical allegations of sexual offences. He was arrested on 28 March and bailed until May.

A police spokeswoman confirmed officers were called to reports of criminal damage at the gallery where it is suspected a man smeared paint on the window with his hands.

She added "specialist cleaning", which had cost about £300, was required to remove the paint.

The force said it did not know the motive behind the vandalism and the man was being sought.