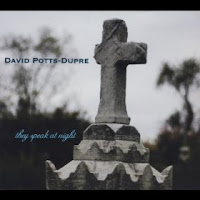 David Potts-Dupre comes from Maryland, and though a latecomer to recording – he’s in his fifties and “They Speak All Night” is only his second album – there’s something about him, which brings to mind songwriters from the Texas tradition, together with other established artists like John Prine and John Hiatt. In fact if it was the ‘70s and Potts-Dupre was 30+ years younger, Rolling Stone would probably be hailing him the ‘new Bob Dylan’ and he’d now be several decades into his successful career.

That’s probably enough conjecture and speculation for now, but it does give some impression of the music that Potts-Dupre makes on “They Speak All Night”. His songs cover a variety of subject matter, from life and death, love and making it work, to the trials and tribulations of the workingman. And if you’re in the mood for something different, on “The Boy On Dismal Hollow Road” we’re treated to an old-fashioned ghost story - a good, clever song with a narrative that draws the listener in, and provides a chill or two.

The album opens with the pairing of “Just Like You” and “Bittersweet”, the latter providing a titular clue as to the poignancy that the song’s themes convey – recognizing a dead wife in a daughter’s face and the mixed emotions felt by the father of a bride. Altogether there are 13 songs to discover on “They Speak All Night” and they all have tales to tell. Try and hear them.
www.potts-dupre-music.com
David Potts-Dupre CD BABY Page
Tony S.