Review: White Hills (plus guests The Bear and Nylon 9) at The Musician, Leicester, 9th April 2013 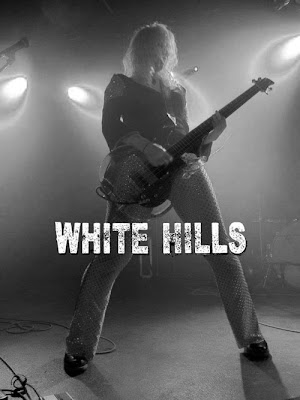 White Hills (plus guests The Bear and Nylon 9) at The Musician, Leicester, 9th April 2013
Bellowing his introductions The Bear (usually one part of Preacher and the Bear) stomped straight into a raucous and intense opening set of guitar abusive blues. Drawing from choice blues topics of family, sex, misery and mistreatment the first half elaborated upon how the blues chose him (not the other way around) and stories of “Sweet Black Angels”, with some chaotic, free soloing. Switching to telecaster, a loose connection / static sound was ever-present and judging by the verve by which The Bear chose to turn it up and forge ahead through a raw “Please Don’t Go” / “I Wanna Be Your Dog” medley and a song about Marijuana usage, it seemed pre-planned and produced an excellent lo-fi effect. Taking time to retune he abruptly called it a day – a spontaneous and unexpected end and really enjoyable stuff.

Leicester’s Nylon 9 graced the stage under a small cloud of dry ice. The female fronted, five-piece combo performed their five songs, including “Dancing With The Dead” and “Let’s Talk About Love” set to a visual backdrop of edited, looped and reformatted B-Movie nuggets and much frazzled and eccentric dancing – a nice touch. Their wonky and searing tales of fantasy and come downs - inset with filmic dialogue, organ, elements of punk, new wave, disco and psychedelia - rocked with a garage-come-Patti Smith groove. They join the musical family tree with dotted lines drawn from Stooges, Spacemen 3 and Wooden Shjips - with emphasis on the dancing.

Their second time at The Musician touring on the shirttails of 2012’s “Frying On This Rock”’s cerebral meltdown of astral jazz, spacerock and power riffage, this time round White Hills’ formula is largely unchanged, with more extended drills propelling their bombastic supersonics to transcendental heights.

Taking to the stage at about 10:30pm with a layer of plush velvets, floral and androgyny, a slow and seductive intro directed their psychedelic juggernaut, careering into a strong and energetic groove, which fixed the mood. When vocals do emerge some ten or so minutes in, the sheer volume levels render them largely inaudible (though an audience member did approach the sound desk concerned that the guitars weren’t loud enough…).

Getting seemingly louder for the pursuing hour Dave W and Ego Sensation blasted out their brand of elongated, overdriven, fuzzy spacerock with Nick Name drumming like he meant it. With only occasional interludes for pre-recorded sci-fi and dialogue, slow and spaced-out reverberations, their sound leant more towards Motorhead than Hawkwind. Employing all available devices to wring the buzz saw sound and dentist drill shrills from the guitar, I’m sure many were left with ears ringing.