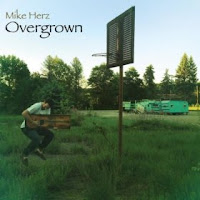 New Jersey singer-songwriter Mike Herz understands the power of words, and on “Overgrown” he presents 14 songs that recount facets of the human condition with some skill. It’s no surprise to read that as a teenager he was fascinated with rap, though it’s artists like Dylan and Springsteen who provide much of the inspiration to be found here. It seems I’m not alone in being impressed; Herz has recently received nominations by the Jersey Acoustic Music Awards in several separate categories, including Top Male Songwriter and Top Folk/Americana Act. Things are definitely happening for the young musician.

Recorded with Pro Tools and Garageband in various studios and rooms, “Overgrown” sounds remarkably cohesive given the circumstances. Herz plays and sings, both in a solo setting and with a band, and the variety of methods add to the album dynamics. Obviously, it works so well because at the album’s core is Herz’s songs and vulnerable voice, and the joys of both can be heard immediately on opening cut “Preserved Land”, a rootsy, lyrical narrative, bolstered by delicate instrumentation. “Doin' Alright” is upbeat and persuasive, and “Dear Younger Me” gets to grip with regrets and various misgivings, and includes some supple guitar work.
www.mikeherzmusic.com
www.mikeherz.bandcamp.com
Mike Herz CD BABY Page
Tony S.