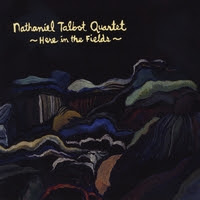 Natives of the Pacific Northwest, Nathaniel Talbot and his group (Sam Howard - upright bass, Russ Kleiner - drums and Anna Tivel - violin), play a sophisticated form of chamber-folk that’s rooted in their rural environs, though it utterly transcends any particular locale or area. Talbot is a chronicler of the human condition, in its many forms, and the play between his finger-picked guitar and Tivel’s violin provides a delicate, otherworldly atmosphere, and one that is wholly captivating. Talbot’s voice possesses a James Taylor cadence, which compliments both his songs and their introverted arrangements. Rhythmically there doesn’t seem too much going on, but Howard and Kleiner are masters of restraint; never intrusive or overbearing, but providing subtle sustenance for the songs and strings.

As for the songs, they’re a substantial and satisfying collection. Talbot gets inside his themes with some skill and his sweeping melodies and vocal hooks are difficult to ignore. Opening track “Jamestown” is a perfect example. Its appeal lies in Talbot’s way with words, the fine arrangement and the sublime interaction of the group. “Edison” is just wonderful, the voices and the ebb and flow of the composition enchants and charms. “The Great Levee” is perhaps the most “country” of the songs on “Here In The Fields” but nothing too obvious, and it certainly registers as yet another standout moment from an album that seems to be chock full of them.
www.nathanieltalbot.com
www.nathanieltalbot.bandcamp.com
Nathaniel Talbot Quartet CD BABY Page
Phil S.
Posted by Bangs at 4/24/2013 02:52:00 pm