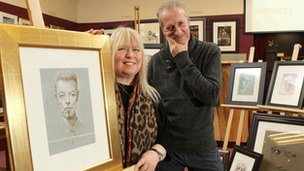 Sketches and drawings of David Bowie and Madonna are among 390 works by renowned Scottish artist Peter Howson which are being sold by his ex-wife.

Terry Howson is auctioning the works to raise money for the couple's daughter Lucie, who has Asperger's syndrome.

The 10 Bowie drawings are from 1994 when he posed for Howson. There are also 10 sketches of Madonna and early drawings of Howson's teachers.

The sale will take place at McTear's Auctioneers in Glasgow on 28 April.

Pop icon Bowie posed for Howson at his London studio in 1994.

The pair struck up a friendship after Bowie purchased two of Howson's paintings depicting the Bosnian war.

The sale also includes the sketches of Madonna, who was the subject of a series of paintings - some of them nude - by the artist in 2002.

Speaking before the sale, Terry Howson said: "Over the years I have built up quite a collection of Peter's art which demonstrates a real mix of his work but Lucie's welfare and future is the most important thing.

"Many people underestimate the financial aspect of looking after a disabled person and how much of a struggle it can be.

"The current economic climate and welfare reforms are hitting the disabled hard and this sale can really help Lucie to live the best possible life she can by giving her the financial security to do so."

Other lots in the auction include drawings from Bosnia, Jerusalem, Glasgow and London and cover all aspects of the artist's output from 1971 to 2008.

Peter Howson added: "The drawings I expect to be of greatest interest to people will be the David Bowie drawings and the Madonna preparatory sketches.

"There were only 10 Bowie drawings and I gave them all to Terry. None have ever been sold and now all of them will be sold in this auction."

Mr Howson said he met Bowie after the pop star bought two of his Bosnian paintings.

"We went for dinner at the Dorchester Hotel alongside the Bosnian prime minister at the time, and during dinner I asked him if he would sit for me," he said.

"David agreed willingly and he was a fantastic subject to draw. I had him sitting quite high, on a 5ft plinth and at one point he seemed to doze off and fell to the floor.

"We had a laugh about it, he's a very charismatic character and we've kept in touch from time to time ever since."