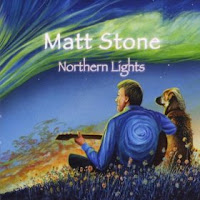 “Northern Lights” is Matt Stone’s debut album, a thoroughly enjoyable twelve-track affair, which carries on the long tradition of Californian troubadours with positive, feel good vibes to share, and love in their hearts. His stated influences include James Taylor, Kate Wolf and Richard Shindell, and all provide reference points to Stone’s own style, if not the songs themselves, then certainly the way they’re presented. He’s a concise, economic writer, with a talent for putting his thoughts into words with the minimum of fuss, and wrapping them in gentle, easy-on-the-ear tunes. Indeed, it’s a sound that’s tailor-made for grown-up radio stations.

Though very much a singer-songwriter album, there’s a long list of musicians who have contributed to the record, and the production throughout is full-bodied and multilayered - and warm and inviting. It begins with the upbeat “The Simple Things”, which celebrates those uncomplicated daily pleasures we all take for granted. It’s a near faultless start, and sets the tone for the whole collection. Next it’s “Sweet Barcelona”, a paean to the Spanish city and then the title track, a perfectly judged narrative is complimented by a country-folk arrangement, with Rick Schmidt’s pedal steel adding ethereal loveliness. The album continues in much the same excellent vein. Fans of the above mentioned artists would do well to discover Matt Stone, sooner rather than later.
www.mattfolkmuse.com
www.facebook.com/mattfolkmuse
www.reverbnation.com/mattfolkmuse
Simon M.