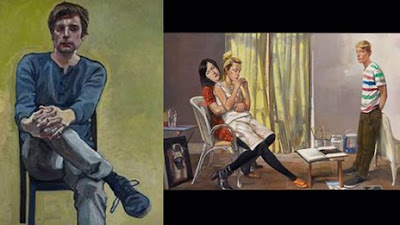 Two artists shortlisted for this year's BP Portrait Award at the National Portrait Gallery have been chosen for their impressions of their children.

Susanne du Toit's Pieter and John Devane's The Uncertain Time will be among 55 works chosen to be exhibited between 20 June and 15 September.

The winner's prize has been increased by £5,000 to £30,000, making it one of the largest global art prizes.
Nearly 2,000 artists applied from 77 different countries this year.

John Devane, a teacher at Coventry University with an MA from the Royal College of Art has been chosen for his group portrait of his three children, which he painted over three years and shows children emerging from childhood.

It marks the second time his work has been included at the Portrait Award - his piece, In the House of The Cellist was shown in the 1995 exhibition.

Susanne du Toit was educated at the University of Pretoria and the Massachusetts College of Art in Boston but is now based in Crowthorne, Berkshire. The painting features her 35 year-old son Pieter.

She said: "I look to the body to provide as much expression as the face. Having said that, the averted gaze of this portrait, which was his choice, struck me as characteristic of his reflective character, and became intensely engaging."

The winner of the prize, now in its 34th year, will also receive a commission for the National Portrait Gallery worth £5,000, while the second placed artist will take home £10,000.

Although the competition is for those over the age of 18 with no upper age limit, the Young Artist Award - worth £7,000, is also presented to an artist aged between 18 and 30.

The ceremony takes place on Tuesday 18 June, at which the prize-winners will be announced ahead of the exhibition opening, which welcomed 255,982 visitors in 2012.