Review: The Imaginary Suitcase – Putting Things On Top Of Other Things

The Imaginary Suitcase – Putting Things On Top Of Other Things (Independent) 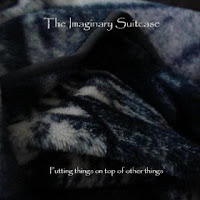 “Putting Things On Top Of Other Things” is his second solo collection of what he describes as ‘demos’, but in reality it’s an album that sounds ready for release, apart perhaps from a little production polish. Leemans writes nearly everything, sings and plays all instruments (apart from a horn contribution from the Bernard Orchestar’s Jean-Baptiste Delneuville), and it’s quite a list, including autoharp, jawharp, harmonica, banjo, dulcimer and e-bow, together with the usual guitar, bass and drums.

It all makes for an intriguing and multifaceted listening experience. Lyrically, Leemans is intent on exploring darker themes, and his arrangements mirror his songs, without wandering into overt Goth territory. Instead, file this eight-track collection somewhere between alt-folk and the sub-genre where Leonard Cohen and David Ackles used to inhabit and you’ll have some indication of his approach to songwriting and record making.

He begins with “Flakes”, his strong voice delivers the lines with some vigor, and the backing strings reverberate the nuances. “The Punchline” incorporates a rock element, though Leemans vocal remains the central authority, its rich tone drawing the listener into the narrative. The two longest tracks both provide highlights. The six-minute “Zombie for You” combines filmic American folk music, with Jacques Brel-esque drama, and is impossible to pin down. The six and a half minute “Black Holes” is a dark love song, and those enamoured with the songs of Nick Cave and David Eugene Edwards should try and hear it.
www.facebook.com/theimaginarysuitcase
www.theimaginarysuitcase.bandcamp.com
www.cdbaby.com/Artist/TheImaginarySuitcase
Phil S.