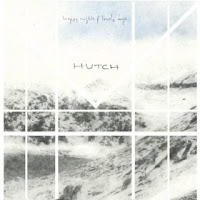 Hutch is Lucas Henderson, his brother, Jesse Henderson, and Colin Nealis. Lucas sings, plays guitar and writes the words, and Jesse and Colin sing back-up, and play a variety of instruments including piano, banjo, upright bass, viola and drums. All three contribute to the arrangements.

Together their music might best be described as ‘country-folk’, though it’s a particularly atmospheric aspect of the genre they’re exploring, and that’s certainly reflected in the instrumentation – guest musicians add pedal steel, trumpet and flugelhorn, and for Lucas’ rich voice they’re an ideal accompaniment.

They seem quite content for their songs to slowly assert themselves – nothing feels rushed or hurried. They describe their songs as “sad songs”, “drunk songs” and “songs that have given up on love”, but for all the potential melancholy and mawkishness such subject matter suggests, they manage to avoid any overt displays of maudlin self-pity. Instead they’ve produced a collection where the listener can’t help but be taken in by the understated elegance and stark beauty of their musical surroundings.

It’s an album that must be heard from start to finish to truly appreciate its dignified grace, and the album has a dedicated Bandcamp page available to sample its delights before purchasing. Pay meticulous attention to “Mary Dear”, which sets the scene perfectly and the almost jaunty “Woke Up”.
www.hutchband.com
www.facebook.com/cachemusic
www.hutchband.bandcamp.com
Hutch CD BABY Page
Phil S.