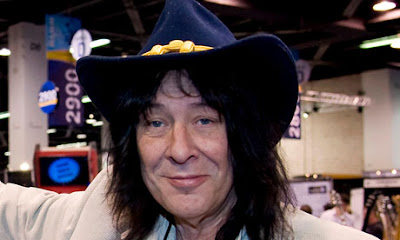 Record producer and engineer Andy Johns, who worked with Led Zeppelin and the Rolling Stones, has died aged 62.

Johns, who was born in England but moved to the US in the 1970s, died in Los Angeles on Sunday following a brief hospital stay to treat a stomach ulcer.

He engineered a number of classic albums including Led Zeppelin II, III and IV and the Stones' Exile On Main Street and Sticky Fingers.

Johns was inducted into the Rock and Roll Hall of Fame last year.

As a teenager he followed producer brother Glyn into the music industry, landing a job as a tape operator at London's famed Olympic Studios, where he worked on albums including Jimi Hendrix's Axis Bold As Love.

"In those days you could go into one studio and Joe Cocker was working, and then you're working with Jimi Hendrix in Studio One, or down the corridor Eric Clapton is doing something," Johns recalled.

He went on to engineer albums by the likes of Jethro Tull and Mott the Hoople, with producing credits including Free's Highway and Television's critically-acclaimed Marquee Moon.

Kim Richards, chief executive officer and chairman of Allied Artists International, described Johns as "truly a legend amongst legends; an icon of icons, who remains an inspiration to all who love and make music".

He is survived by his wife Annette, sons Evan, Jesse and William, and four grandchildren.