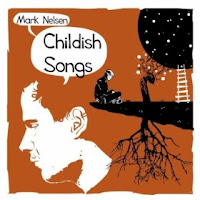 The founding member of San Francisco acid-trance-rockers Electric Shepherd, Mark Nelsen’s debut solo record certainly incorporates elements of psychedelia, though it presents an altogether lighter side of his work, and indicates a genuine affinity with popular music styles – from Brill Building classicism to indie and Americana. Recorded over a two-year period, and with such a range of influences at play, there was always a danger that “Childish Songs” might have been disjointed or incoherent, but the opposite is true. It all hangs together and flows remarkably well, with a succession of standout songs providing natural peaks.

He begins the album with “A Clown's Response”, it’s off-kilter Western guitar and rhythmic roll hints at Midlake, though nothing too overt, and it provides a near-perfect launch to the nine-song collection. “Crazy but Gentle” provides an instant contrast, its soft, undulating guitar lines slowly giving way to a piano tinkle. Nelsen plays guitar, bass, keys and various percussive instruments, but he’s assisted by other musicians, primarily by Electric Shepherd drummer Sonny Pearce, and Zoe Blank, who sings occasional backing vocals, and delivers a series of elegiac violin parts. She’s particularly effective on “Oh! Romance”, an epic pop song if ever there was, and cut from much the same cloth, “Still Life” sticks around for nigh on seven minutes, without wasting a single second.
www.facebook.com/Mark-Nelsen
www.marknelsen.bandcamp.com
Phil S.