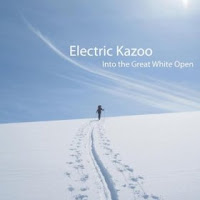 Formerly known as Good Question, the Calgary, Alberta outfit renamed themselves Electric Kazoo and have released a brand new album, boldly entitled “Into The Great White Open”. Though hardly a household name, the band, Sean Goebel (vocals, guitars, banjo, and programming), Mike McPhail (keyboards and vocals), Andrew Clark (drums) and Brian Snyder (bass, guitars, and vocals), have been doing their best to remedy the situation, through extensive gigging. Regulars on their local scene, they’ve also toured all over the world, including China, and they’re already playing shows in support of they’re new release. They’re dedicated, that’s for sure, and the quality of their material suggests a breakthrough, sooner rather later.

Of course, luck and timing play a major part in the success of any artist, and it will be no different for Electric Kazoo, but there’s no doubt they deserve an audience. Goebel’s songs are clever and ambitious, and the group plays their upbeat folktronica with equal parts skill and enthusiasm. The collection opens with “Ambiance”; drummer Clark leads the quartet in various directions and the shared vocals add to the aural intrigue. “A Spontaneous Departure” displays a similar quirky outlook, and “Car Window” combines late period Richard Thompson with The Icicle Works – which works rather well.
www.facebook.com/Electric-Kazoo
www.electrickazoo.bandcamp.com
Electric Kazoo CD Baby Page
Phil S.