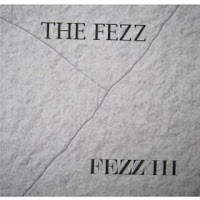 The Fezz are four guys called Fezz – surnames anyway – and “Fezz III” definitely isn’t their third album. In fact, I think it’s their eighth long player since 2008, though, as with much of The Fezz’s oeuvre, calculating their output is an inexact science.

The quartet (guitarists JT "The Meat" Fezz and "The Famous" Mr. Mike Fezz. On bass, Ben "Rock Steady" Fezz and drummer Wanz "Wanzangeles" Fezz) claim to have recorded 500 songs over a two year period, which boggles the mind, though a mere sixteen tracks have found their way onto this collection of lo-fi outsider guitar pop, alt. rock and happy-go-lucky acoustic folksong. Fortunately, what they lack in production polish they make up with unbridled enthusiasm, and a talent for a good tune.

It’s an album that needs to be approached with an open mind, where vocals aren’t always in tune and instrumental prowess isn’t the be all and end all. Once you’re in the correct mindset, you’ll discover a fair percentage of their songs lodge themselves in the part of the brain that instigates outbreaks of unruly singing - perfectly acceptable in one’s shower, but less so on crowded public transport or in a dentist’s waiting room. My current faves are “Captain Crunch”, an unreconstructed noise-fest, with added poptones, and “Much Too Young”, which is almost Dylan-esque.
www.thefezz.com
www.facebook.com/The-Fezz
www.reverbnation.com/thefezz
The Fezz CD BABY Page
Phil S.