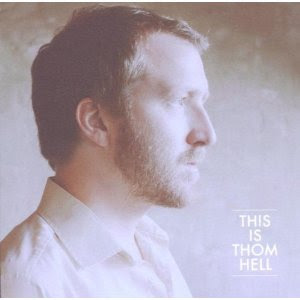 Thom Hell – This Is Thom Hell (Voices Of Wonder)
I’ve often been heard to ask the question ‘who is Thom Hell?’ and now I’ve got my answer. Voted Norway’s Best Male Artist at the Norwegian equivalent of The Brits (The Nors? Probably not), Hell is an old fashioned kinda guy, with an old fashioned sound. His new album indicates a fascination with respectable songwriter types like McCartney, Ben Folds, the Finns, and Elton and Bernie. His songs, their arrangements and the instruments that play them, all hark back to the ‘70s and ‘80s, and do you know what? It’s pretty good. Fans of proper music please form an orderly queue here.
www.thomhell.com
Rob F.

Jay Brown – The Jester (Independent)
A one-man-band, when he’s not playing with the Lazybirds or Shantavaani, Jay Brown seems comfortable on his own, and it suits his rootsy pop songs. I guess it’s probably best to file it all under Americana as there are quite a variety of sounds and styles on “The Jester”. The blues is a definite influence, as is old time country, and I’m sure he’s familiar with more than his fair share of Greenwich Village folkies. Fortunately, his songs stand up to scrutiny, and he brings it all together with a dash of humour and with a smile on his face. Not groundbreaking, but that’s why we’ve got pickaxes.
www.jaybrownmusic.com
Rob F.

Steve Moore – Primitive Neural Pathways / Vaalbara (Static Caravan)
Steve Moore, one half of Zombi, has created a double-disc synth behemoth with “Primitive Neural Pathways / Vaalbara”. The first disc feels like a product of the English countryside, as the mood is quite rural and green, and names like A Dancing Beggar and Mike Oldfield seem appropriate. Vaalbara, the second half of the set, is more abstract, with an emphasis on longer segments and satisfies itself with pure noise and drones. At this point it seems natural to mention Klaus Schulze’s “Cyborg” album, which I’m sure will mean everything to a select few.
www.staticcaravan.org
Simon M.

Roedelius / Schnieder - Stunden (Bureau B)
“Studen” is the result of the cross generational collaboration of Harmonia / Cluster’s (or Kluster or Qluster if you prefer) Hans Joachim-Roedelius and To Rococo Rot’s Stefan Schneider, and created on the proviso that “the music should be quiet – otherwise anything goes”. Void of lyrics “Stunden” (title track presented in three parts) largely centres on Roedelius’ piano with the fragility supported by bass, synthesizers and occasional zither and guitar. The open concept allows the music to take smooth tangents into darkness (“Das Eine”), romance (“Miniatur”), bouncy surrealism (“Single Boogie”), vague and minimal call and response (“Geschichte”) and meditative introspection (“Upper Slaughter” and “Land”).
www.bureau-b.com
Willsk
Posted by Bangs at 10/14/2011 07:54:00 pm