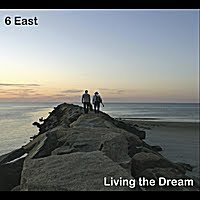 6 East - Living The Dream (Independent)
6 East is Cape Cod duo Todd Nickerson and Jonathan Soucy, and on their debut long-player they’re joined by percussionists Rob Loyot and Sam Holmstock (both from Entrain) and Mike Levesque (drummer for artists such as David Bowie and Susan Tedeschi). The result is an album with tight production and a layered, full band sound, yet it retains certain frayed edges, and the listener is under no illusion that they’re listening to a record with folk song at its core. And like all the best folk songwriters, Nickerson and Soucy have got a message, which sometimes they deliver unambiguously and at other times with lashings of irony. It’s for the listener to decide where the dividing lines are.

“Living The Dream” appears to be a not to distant cousin of Springsteen’s “Born In The USA” insofar that you’ve got to listen beyond the title to hear the song. “Afraid In America” makes a more obvious statement. Both songs are arranged into straight-ahead tunes that it’s difficult not to interact with. In other words, you will sing-a-long. Nickerson and Soucy both sing in big clear voices, and there’s no loss of clarity or meaning, oblique or otherwise.

There’s a lot of information to take in here, an abundance of songs with depth and worth, and it’s a fine collection that works on both an intellectual and, dare I say it, purely superficial level. I’m becoming more enamoured with it each time I hear it. File it at the folk end of your Americana rack, though it may well take up residence in your CD player.
www.6east.net
Rob F.
Posted by Bangs at 10/13/2011 10:59:00 am