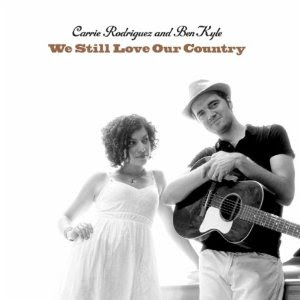 Carrie Rodriguez and Ben Kyle - We Still Love Our Country (Ninth Street Opus)
For some reason I didn’t expect this to be quite so solid country, instead I expected a more alternative take, rather than this collection, so deeply dipped in the same glossy sheen that covers the boards of the Grand Ole Opry, these days. The opening duet "Your Lonely Heart" is so solid (country) it could be made of cement. The finale, a duet of the old standard “Love Hurts”, equals this. Both are beautifully sung and superbly produced, and all I could think was that I seem to have heard both songs many times over the years, despite the former being a Ben Kyle original. The latter I’ve heard countless times, of course, from The Everly Brothers through Gram Parsons to Nazareth, and this version is nothing special. The same goes for Ben's song, and it could have been written by anyone from a Nashville songwriting stable, and run out just as slickly. With the pedal steel and the fiddle in exactly the right places, the keening harmony voices scampering along just above it all, buoyed by the sweet, neat production. You get something that’s almost bulletproof professional, but has turned out so ordinary. It’s as though the life has been squeezed out of the songs whilst striving for perfection, which is what they appear to have achieved, is you really want to call it that.

Needless to say, these tracks haven’t just been thrown together. All the material is given the same smooth treatment, and only a few break out of their straitjacket. Townes Van Zandt's beautiful "If I Needed You" is a different take altogether, mainly because it is such a great tune, but also because the smooth production allows for a soft brushed drum to hold the ballad together, providing the roots of the track. This goes for Chip Taylor's "Big Kiss", too (another fine song choice), with everything just perfect, and the subtle brushed drum again present. "Unwed Fathers" has been a favourite of mine since acquiring John Prine's “Aimless Love" in the mid ‘80s, so the version here, although very polished and, to be fair, quite superb, can’t improve on the original; not for me. The only original worth mentioning is "Fire Alarm", although it can't match those three covers.

I hope that the next time this duo get together, obviously with talent to spare, they decide to record their work on just an eight track, in a cabin, in the middle of nowhere, with just acoustic guitars. Oh, and yes, do take Ricky Fataar with you, for his expertise on drums and percussion is quite exceptional. Looking forward to it already.
www.carrierodriguez.com
Kev A.
Posted by Bangs at 10/08/2011 10:13:00 am