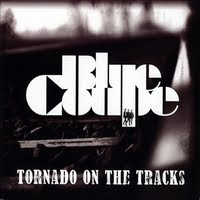 Blue Coupe - Tornado on the Tracks (Independent)
When you’re as jaded and cynical as I am, the prospect of a debut album from a three-piece comprising two founder members of Blue Oyster Cult and an ex-Alice Cooper bassist (see what they did with the name there?) can be a cause of shaking and dread. The cover photo of three sharp-suited ‘geezers’ in shades striding purposefully through some urban wasteland however is just the first hint that there may be something more than nostalgia underpinning ‘Tornado on the Tracks’.

The actuality is that these guys have, against all the odds, come up with a damned fine slab of heavy blues. If there’s a masterplan behind the project it’s to plaster razor-edged guitar licks on top of an industrial-strength backbeat. What stops it from morphing into ZZ Top is the edginess of the vocals: disdainful and off-hand almost, they project an air of casual menace which, coupled with the aforementioned visual image, conjures up the notion that these are not characters to be messed with.

There are some cracking songs here as well, including the opening blast of ‘You (Like Vampires)’ and ‘Angel’s Well’, the title track, and bassist Dennis Dunaway’s one growling vocal contribution, ‘Waiting for My Ship’. These are old dogs with a lot of life; make way and let them through.
www.bluecoupeband.com
Neil B.