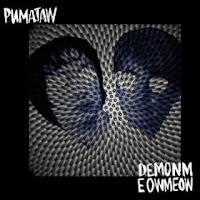 Pumajaw - Demonmeowmeow (Bedevil Records)
"The Mazy Laws", the track that opens up this complicated box of songs, is a difficult listen, unless you’re into the avant-garde mix of vocals as viscous as the best motor oil, and a backing that varies with the pace, from electronic trance to buzzsaw guitar, sometimes all together. The limited lyrics are intentional, I suppose, so that Pinkie Maclure can savour the words before focusing on projecting them at you, the listener. So, an eight-minute opener for starters, either brave or foolish or both, but certainly ear-catching, whether you like it or not. "In The Outlands" follows, and is far more conventional (almost a ballad), but still allows for Pinkie to flow all over the song. Her bewitching vocals are again surrounded by twitchy loops of sound that serve the purpose admirably, bringing out undertones that are as obvious as they are obscure - see if you can nail it down, then!

However, it’s with the third track, "Tallulah", that it all starts to get terrific. Although this has familiarity written all over it, the Gothic overtones meld the vocal to the guitar work of John Wills, and you get a ghostly, ethereal track that haunts you for long afterwards. "The Safe Inside", is a lament beautifully sung and put together, with ringing guitar, choral effects, and a slow driving beat that chugs along at just the right tempo, and it needs every second of the seven and half minutes it’s been allocated.

Hard driven and uncompromising, "Mask", with its metronome drumming and lyrics to match (“Coal black, coal black... The earth is black between our backs... While oysters slip down wealthy throats... We're tossed aside by hairless girls and careless boys...”), kicks off the second half of the album with great appeal. It’s followed by the sinuous lament "Chinny-Chin-Chin", which has the supplementary appeal of an accordion (squeezebox?) adding a seascape sound. It would be unfair to refer to both "Your Arms, Your Doors" and "Tumbledown" as maudlin, but after surviving this long that’s the first impression you get when listening to them. My point is that such an uneasy listen as this whole album is, it might be pertinent to actually listen to it in two halves. I‘ve done both now, and actually enjoyed both methods. So, three listens in the last two sentences - that should tell you a lot about this strange and uneasy, but at its best, quite beautiful music.
www.pinkiemaclure.co.uk
Kev A.
Posted by Bangs at 10/29/2011 09:42:00 am