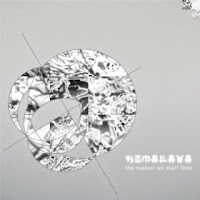 Himalaya - The Reason We Start Fires (Independent)
Be careful not to get this band - Himalaya - confused with world music outfit, The Himalaya Band. Believe me, the music is over 29,000 feet apart. Still, a band name that evokes getting up close to the heavens needs to be backed up by its music. It has to reach an extremely high peak. No worries there, then. Himalaya deliver atmospheric, warped psyche, edged with a touch of shoegaze-cum-stoner rock, and even a touch of 1970's prog, with an audacity that is hard to conjure up, even if you have a track record going back some decades. Yet this is a young band from Brooklyn who are releasing their second album. And yes, they have everything roped down tight, despite the pinnacle they’re on. Take note: the pinnacle that they’re on, not just aiming for.

The music is a mellow treat, as if it’s been soaked in a musical marinade from a variety of decades before being laid out for us to quietly feast upon. Coming from places that have been visited by Pink Floyd in the ‘70s, the Jesus And The Mary Chain, Ride, Slowdive, Spiritualized, Sky Parade, and others, in the decades after, you soon succumb to the blissful grooves from the scuzzy guitars, the tight rhythm section, the hazy vocals; the overall vibe is 'Hey, everything is cool', and you’d better believe it.