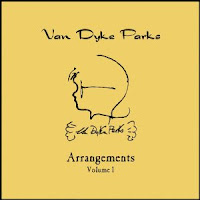 Van Dyke Parks - Arrangements Volume 1 (Bananastan)
Van Dyke Parks - though most famous for being co-writer/lyricist on Brian Wilson/Beach Boys’ “Smile” album - is a musically diverse character who’s has been involved with many artists over the past four decades in various capacities: musician, composer, lyricist or producer, as well as a solo recording artist. “Arrangements Volume 1”, as the name implies, focuses on his collaborations in the guise of the arranger, an art which involves taking existing compositions and adapting, adding to, or evolving them into something different yet recognisable. Being Volume 1, this compilation, curated by Parks, starts at the very beginning (a very fine place to start) of his studio career in the 1960s.

What gives the tracks their defining Parks stamp is their playfulness, with plenty of whimsy, mild eccentricity, free abandon, and he adds a wealth of inventive juxtapositions to the musical backdrop, like violin and saxophone on “Alligator Man” or zither and trumpet on Arlo Guthrie’s “Valley to Pray”. The first few inclusions combine sunshine flower power optimism with tack piano led pseudo-music hall and a cranky Heath Robinson inventiveness. The next wave instills a country, honky-tonk feel and then the styles and genres start to rapidly shift.

Parks ventures briefly into the realm of Christianity, before taking a gospel turn with the inspired rendition of Jimmy Cliff's “Sitting in Limbo” by Dino Martin (son of Dean). Onto Calypso with Bonnie Raitt's cover of Calypso Rose's racy “Wah She Go Do”, then a short revert to earlier form with The Mojo Men’s version of Buffalo Springfield’s “Sit Down I Think I Love You”. A flamenco infused “Cheek to Cheek” by Lowell George then leads onto a dose of hard funk from Little Feat, before Parks closes the proceedings with a little Moog music.

Besides the five tracks that Parks performs, and those mentioned above, are inclusions from The Beau Brummels’ Sal Valentino, George Washington Brown and Ry Cooder. It’s a collection that certainly begs the listener to train their ears to what is going on at the edges of the recording. Marvelous.
www.bananastan.com
Willsk
Posted by Bangs at 10/25/2011 03:17:00 pm