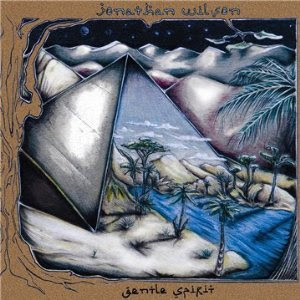 Jonathan Wilson - Gentle Spirit (Bella Union)
I’m pretty familiar with Jonathan Wilson's early work with Muscadine, who I remember with affection, having bought “The Ballad Of Hope Nicholls” when it was released in the mid ‘90s. Years later it disappeared from my collection when I lent it to a friend, who still has it (must have thought it was a gift). I think there’s a second Muscadine album, and a live album out there too, but they’re unknown to me. We are talking about some twelve years ago, so just where has he been all this time? Well, he has amassed quite a few friends for starters, and a lot of them appear on this record.

With Muscadine, his slow and sleepy sound (the album title is spot on) could sometimes take its toll, as the music was always heading towards an earnest side, but here, on this second solo album (the first was never released) there’s a variety that allows for a fresh start between him and you. For instance, I have never heard him sing anything like "Desert Raven" before. The glorious production encases and enhances his vocal take, and he carries you back to Laurel Canyon without a hint of effort. And besides the lush strings you get some luscious guitar. This is Allman Brothers hooking up with the Eagles, whilst America holding the reigns in a neutral territory, and it’s delightful. Leading up to this is the gorgeous and beautiful title track, and "Can We Really Party Today", both of which have a full and mellow sound, his acoustic guitar strumming with occasional piano and strings. The cello / piano combination on the latter is a delight, especially when the organ and drums kick in with background chorus - a perfect introduction to lead you up to the mighty Laurel Canyon (song).

So, what an opening three tracks you get, with keyboards weaving in and out, flutes and woodwind, the magical acoustic and electric guitar work, all topped off with sublime strings; and all in the right place at the right time. After this opening 20-minute salvo there are another nine tracks to go, over 45 minutes. So, does the quality dissipate at all? Can he maintain this top-level performance throughout? Or does it go on just a tad too long?

"The Way I Feel" continues that wonderful drift, with some extra superlative organ rushes and guitar slinging, so the drift becomes a less nonchalant sidle, as the instruments strut their stuff. Last track "Valley Of The Silver Moon" completes the canyon feel, and at over ten minutes brings the journey home in some hazy style. Involved arrangements and jams pepper the tracks, becoming free-form at times, which, for me, are all to the good.

I'm not sure if having a previous life as a ‘60s teenager with hippy leanings helps, but I found an awful lot to enjoy here. I expect you will, too; ‘60s hippy leanings or not.
www.bellaunion.com/introducing_jonathan_wilson
Kev A.
Posted by Bangs at 10/22/2011 02:21:00 pm