The Nightingales: new record and a tour 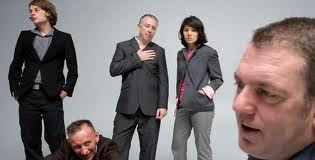 Born out of Birmingham's original punk group The Prefects, the Nightingales have stubbornly ploughed their own furrow in the field of alternative rock n roll for three decades.

Described in John Robb's definitive post punk biography 'Death To Trad Rock' as "the misfits' misfits", the band has constantly garnered praise and respect from other artists and received endless glowing press reports, particularly for their live shows.

Led by singer/lyricist Robert Lloyd ('The most underestimated songwriter of his generation' according to the Independent) the latest incarnation of the Nightingales - the best batch yet - will be touring UK and Austria in Oct/Nov; their final live dates prior to the release of their new album on Cooking Vinyl in April 2012.

The ten UK shows follow their tour in May which culminated in a headline performance at the Southbank Centre in London as part of Stewart Lee's Austerity Binge and the Festival Of Britain, which Mojo magazine called "Astonishing. Contender for gig of the year!"

To coincide with the UK dates the group will be releasing a new 10" vinyl 45 - "The Lost Plot EP" - produced by Hans-Joachim Irmler of krautrock legends Faust.

Next year, in addition to the 'Gales own new studio album, there is a 'tribute' album due for release featuring covers of Nightingales songs by various artists from Europe and USA (Including musicians Art Brut, Freakwater, The Raincoats, Pram, the Mekons, Luke Haines plus stand up comedians Stewart Lee and Phill Jupitus, author/academic Greil Marcus and many others).