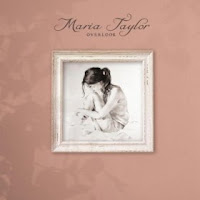 Maria Taylor - Overlook (Affairs Of The Heart Records)
I’ve recently been listening to the un-evolved Maria Taylor. I didn’t know that it was her I was listening to, as I‘d not discovered the fact that she was an integral member of the band Little Red Rocket (two of their CDs were languishing on my shelves, I checked them out, saw that Ms. Taylor was part of the band, and the wheels started turning). It was the very day this album came through the letterbox, which furthered the coincidence. No, I don't believe in them either, so I got right down to it, a direct comparison to 'Who Did You Pay', the 1997 debut album by LRR, and this brand spanking new bunch of ditties.

Well, in between there’s been (and still is) Azure Ray, a duo with Orenda Fink, who was also a collaborator in LRR. So, from indie girl rock squall, with occasional songs of a more hazy and gentle nature, to gentle balladry, with occasional squalls of guitar, as on second track, "Matador". (Alas, as much as I love the gentle balladry, I do so wish that there was more of Browan Lollar’s wigging out on here, as he’s responsible for 'all kinds of guitar and awesome crazy solo' on the "Matador" track. In fact, he features on all nine songs, and his guitar work is pretty good to say the least, but on no other track does he sound so incendiary).

Back to Maria Taylor, then, who is well into a solo career, this being her fifth album under her own name. To be honest, after hearing “Overlook”, I can live without the two LRR albums. Maria Taylor has changed her musical approach considerably over a decade and a half, firstly with Azure Ray, then with her solo work, and all for the better. The lovely build up on "Along For The Ride" is imbued with a fragile intensity that threatens to melt away into nothingness. However, this is not unique on this album. Melt away is exactly what this beautiful music appears to do, all of it. I listened to all nine songs and time evaporated, the songs finished almost before they started, and the 33 minutes they lasted can never be enough. This is the best work I have heard from Maria Taylor, but there’s just not enough of it.
www.mariataylormusic.com
Kev A.
Posted by Bangs at 10/29/2011 10:37:00 am