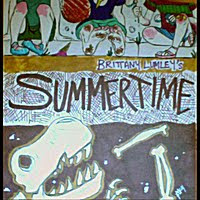 Brittany Lumley - Summertime (Independent)
Brittany Lumley’s debut sounds like it was recorded live on the most basic of equipment, but the uncomplicated approach doesn’t detract overly from the listening experience, and what it lacks in sophistication, it makes up for with simple charm. Lumley’s got a voice and style that’s easy to enjoy, and her songs stick around long after the music’s over.

Children feature heavily on “Summertime”. The lead track “Nine Fingers” was inspired by stories of kids put to work in the 18th and 19th centuries on primitive machinery, and how they often lost fingers, and the final two tracks, “Leona” and “Giada” were written as lullabies for two cousins who were born within a couple of months of each other. Both are gentle and sweet songs, without being too soporific. Actually, the latter track might be the best thing here, and I’d be tempted to sit up and applause if she were to sing it to me, though I’m struggling to imagine the circumstances.

I’m already looking forward to her next record, though a little studio time with an experienced hand on the desk wouldn’t go amiss.
www.facebook.com/Brittany-Lumley
Rob F.
Posted by Bangs at 10/05/2011 08:08:00 am