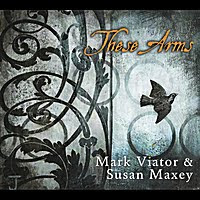 Mark Viator & Susan Maxey - These Arms (Rambleheart Records)
Mark Viator and Susan Maxey originally set out to record some low-key acoustic versions of some new songs, together with a few old favourites, almost, it seems, for their own entertainment. Imagine their surprise when they came up with this masterpiece. Something obviously happened along the way, and judging by the sleevenotes, I’m guessing that a whole group of very talented friends heard what they were up to and decided they didn’t want to be left out. A modest, minimalist, unplugged session became an electric, full band extravaganza, and even Slaid Cleaves turned up for a duet.

That sort of thing doesn’t generally happen in Leicester, but “These Arms” was recorded in Austin, TX, and suddenly things are clearer. As recording commenced, a host of first-rate musicians dropped into Viator’s studio, including AB Band guitarist Jim Stringer, Austin keys-legend Chip Dolan and the Leroi Brothers' Steve Doerr with his harmonica. Slaid Cleaves duets with Maxey on the Hank Williams classic “I'm So Lonesome I Could Cry”, which is a fine way to end the record, but there’s no shortage of great tracks beforehand.

Here goes: “By The Riverside” is a Viator original. It features some bold slide guitar and shows off his Louisiana Cajun roots. Maxey takes vocals on the title track, and it’s a performance full of heart and plenty of soul, as is her take on Kate Wolf’s “Across The Great Divide”. She doesn’t quite make the latter her own, but it’s up there with the other great versions. “Queen of the Bayou” is another chance for Viator to parade his swampy pedigree and “Dharma Bums” brings out his wandering Kerouac side. All in all, just a great collection, and one that’s easy to recommend to any fan of Texas roots music, Americana or alt. country.
www.facebook.com/viatormaxey
Rob F.
Posted by Bangs at 10/08/2011 09:20:00 am